Habitat at the BEAMS Festival

On Saturday the 20th of September Habitat the Game will recreate an interactive winter wonderland in Henrietta Lane, at the annual BEAMS Festival in Chippendale Sydney:

The winter wonderland will allow players to mirror their portable device and play the game on the large screen. 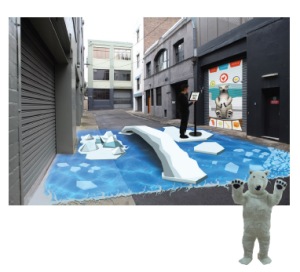 To reinforce the sustainable message a series of displays will be set up to demonstrate the real-world actions required to keep the polar bear alive and happy. The Installation will represent bear’s habitat by projecting an icy arctic ocean with oversized cardboard icebergs, sheets of ice and life size polar bears inhabiting the cardboard ice world.

Team Habitat will also be running an interactive scavenger hunt. There will also be some of Australia’s most popular virtual pins relocated to the area for the day! Players will be able to collect the humpback whale, koala, black cockatoo, kangaroo, including popular Wilderquest series of pins.

Find all of the pins and receive a prize!

Habitat the Game virtual pins at the BEAMS Festival

The event starts from 5pm so bring your kids and your phone and enjoy!

The world’s habitats are in danger and you can help save them. In the vein of the Tamagotchi persistence play craze of the 90s, users will undertake actions to keep an endangered animal alive. In Habitat game players will adopt a polar bear. To keep the bear alive and healthy, players need to successfully complete events in the game and undertake real world actions. By completing these TASKS players will progress through levels, increasing the health of their bear and earn badges of recognition for their efforts. Ultimately the goal is to save the world by improving the bear’s health.
View all posts by habitatthegame »